day 13: brave while I trust in God's perfect timing

Today I am preaching to myself. You just get to overhear it. This story of Joseph is just what my heart needs to hear.

Joseph waited and waited and waited for the vision God gave him for his life to come true - and this is normal. Maybe not the sold into slavery and thrown into prison part but the whole waiting on God to turn vision into reality, well it takes time and how we spend that time of waiting determines how ready we are when the door finally opens. Moses is another example of someone who waited, but not so well.


In Exodus 2:11-12 we read that he looked out and saw "his people" and he wanted to do something. The Bible doesn't say anything explicitly about Moses other than that he knew he was the child of a Hebrew family but I wonder if his actions on this day were motivated by a vision he had for his future. I wonder if he, like Joseph, had been given a vision for his future - a heart to deliver his people from their heavy burdens.

Because when God called Moses to become the man He had made him to be Moses says more and more clearly "you need to pick someone else." (see Exodus 3:13, 4:1, 10, 13) Moses had obviously given up on his vision for his future yet God had created Moses in a unique way and given him a unique experience to prepare him to become the greatest legal mind of his nation. Moses forgot. He gave up.

Jesus waited too. We catch a glimpse of the young Jesus as a twelve year old boy in the temple but we don't see him again until he is a thirty year old man setting out to begin his public ministry. What must have happened during those years? I wonder if they were filled with yearning, especially after his earthly father died and weight of providing for his family falling into his shoulders.


With God there is no such thing as wasted time. If Jospeh hadn't been released from prison at that exact time that he was he would not have been able to truly walk in his destiny. The timing of each season of Joseph's life was very specific and while I'm sure it was nearly impossible for Joseph to have percieved this while he was in prison I think he realized the truth of this by the end of the story.


I have been waiting for what feels like a lifetime for God's vision of my life to become a reality. So today I am releasing my expectations for a specific outcome at a specific time. I have hope that God is at work, I long for God's love to be set on display and for His glory and beauty to be demonstrated in my circumstances, but today is a good day.

If I am being honest a lot of the time I want God to work in the circumstances in my life so that I will be more comfortable and feel happier. I end my prayers with "for your glory" but what I really mean is "so that I will be happy." Do so really believe it when I sing "Christ is enough for me" or is that something I just sing on Sunday? Do I really believe that if the things I have been praying for never come to pass that God will have given me something better? I say to God "but what could be better than a happy marriage?" Here is one thing better than a happy marriage: a heart satisfied with God. Not a heart satisfied with waiting until it gets what it wants, but a heart truly satisfied with God alone. In the middle of my mess. Trusting God's goodness whatever the outcome. He is good no matter my circumstances. He loves me and He is providing for me no matter how I feel today. 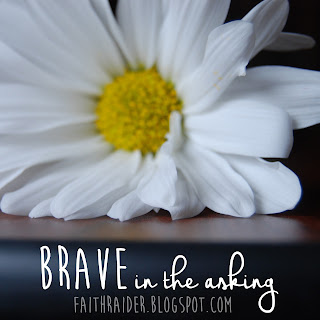 day 2: brave in the asking

faith ann raider
reader, writer, peanut-butter and jelly maker - nurturing the soul of your writerly self with group and one to one coaching. author of: "Confessions of a Roadkill Christian", "Brave Women of the Bible", and co-author of "Along the Way: a Bible Study". New book coming soon!